I never knew a less admirable human being nor, at the same time, a more admirable shipmate. When I met him, Ziggy was on the run from the Spanish Government for desertion from the Spanish Foreign Legion. He had joined that curious unit to escape from the German Government to whom he admitted owing a very large amount of taxes. I suspect that the tax problem was only the tip of an iceberg of peccadilloes because Ziggy, the eeliest of types, would easily have slithered out of so small a contretemps as taxation.

Ziggy was primal. His every instinct, his every response, was a manning of the ramparts. He was a survivor in a world which had dealt him lousy cards which, it must be admitted, he played badly. Ziggy could read...about a page a day...but only from sappy love and adventure novels printed in large type. In the time I knew him he never read, or even glanced at, a newspaper. The world about him was tactile...what he could touch he knew. All else beyond the reach of his senses was a gray fog which held neither threat nor promise for him. Politics, art, literature and history were not even words in his vocabulary.

Ziggy was blond and his judgment of folk was on a descending scale of whiteness. Anyone less blond was suspect. Dark skins were monkeys, Italians were dismissible, the English made rubbish, the French were lousy engineers. Women were an unmentionable word and existed solely for his pleasure and use. He was, he must have been, a creative lover because despite his despicable nature his retinue of obedient females was impressive.

Ziggy gave no one his loyalty. For short periods he would rent his loyalty out but the lease was easily and frequently canceled. He was a liar, a cheat, a scoundrel, a thief and, if the truth be known, probably a murderer, a pedophile and a pederast.

But all that was ashore. The moment Ziggy stepped onto a sailboat he was the best shipmate I have ever known. He became intensely loyal to the boat and his skipper and would fight off attacks, both financial and physical, with unmeasured intensity. He was gentle with crew and refrained from the more obscene four letter words while untied from dock. And Ziggy was a dream in any emergency. He was frighteningly strong, and would put his strength at risk without a thought to self. He was instinctive as a sailor and brutally creative as a mechanic. Engines did not last long around Ziggy but when needed they ran...cowered a bit, but ran.

His touch on a tiller was as gentle as his view of the world was fierce. Ziggy, stateless and without a passport, knew that the last place in the world in which he could be free was in a sailboat...away from tormentors (and tormentees) who confused and confounded his limited grip on reality.

Ziggy came to me in Djibouti, rowing over from a boat on which he had just arrived. He was in trouble with his skipper and, without papers, he could not even go ashore. Ziggy needed passage to the Med on a small sailboat free of the close scrutiny of officialdom. I was his only hope, the only small boat in Djibouti going north.

I took him on and he restepped my broken 55 foot mast almost with his own strength alone, he kept my reluctant engine going in the turbulence of the Red Sea and he caged free fuel and supplies from beer buddies on oil rigs on the way north. Ziggy saved my life and my boat more than once and served with cheerful selflessness all the time he was aboard.

I agreed to take him to Israel where the Israelis, with their deep knowledge of statelessness, let him ashore. Someone gave him an engineless, mastless, sailess wreck of a wooden 21 foot sloop for which Ziggy promised to pay a huge sum when he had it in shape. I pointed out that he was being cheated but Ziggy shrugged and went on rebuilding his frail craft with whatever inadequate materials and equipment he could beg, borrow or, as it proved, steal. Ziggy, who had always held the world at ransom, was getting his comeuppance.

One dawn we awoke to find Ziggy, his latest lady serf and the little engineless boat gone. In the night he had slipped his lines and drifted quietly in a most seamanlike fashion through the tight noose of security that the Israelis have thrown around their beleaguered nation. He left behind him numerous folk who, secure in Ziggy's lack of a passport, thought that their property was safe with him.

Ziggy had found a way, the only way, to to survive in a world where people sans passports were fair game for any petty policeman. Ziggy knew, as those of us who, in other contexts, take to the sea know, that only at sea, needing only the winds, was he ever again to be his own man.

I sailed from Israel and made port in Larnaca on Cyprus. As I pulled in a familiar blond sailor waved to me from the dock. Ziggy, in his impossible little boat had made the first leg of his passage to freedom. I was delighted.

I leaned across the bow and out, Hey Ziggy...terrific...glad to see you. Ziggy smiled, cupped his hands and in a stentorian stage whisper called back, Don't...call...me...Ziggy!

Note:
In an article in Sailing Magazine, Skip Novak reports running across Ziggy in Tristan De Cunha. Ziggy showed up in a 30 foot steel boat and promptly ran it ashore, The boat was a total wreck but Ziggy seemed not too concerned...and for good reason. After three months of caging on the good will of the islanders, Ziggy caught a merchant ship to South Africa and has since disappeared.

After he left, an islander hauled the boat from the water and discovered, under a coat of paint, the real name of the vessel. Ziggy had stolen her in Europe and was. no doubt, off to South Africa to steal another. 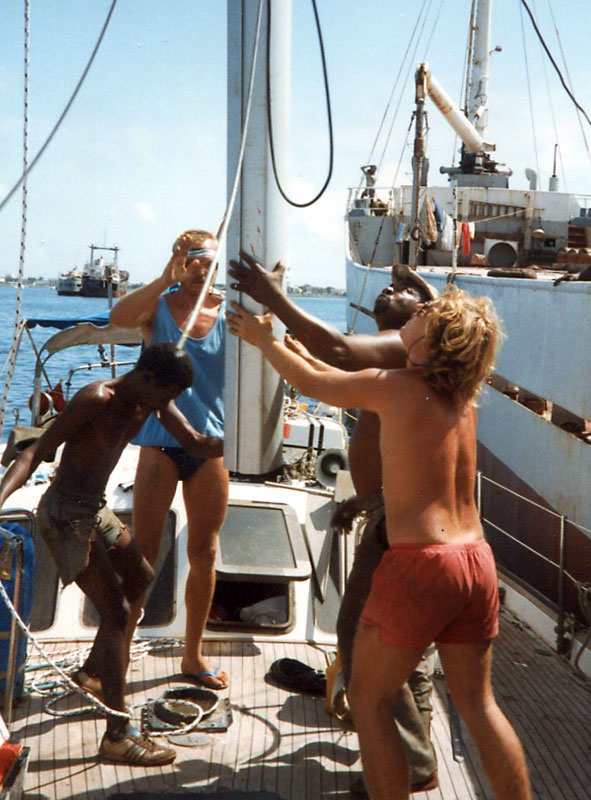 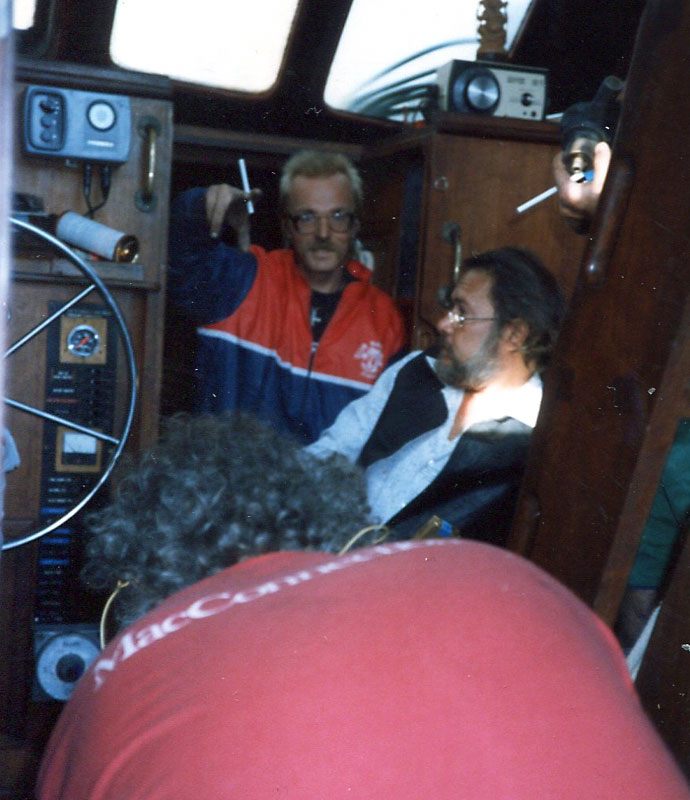