The Mystery of the Great Wall Of Faial

Superstition and myth are no strangers to the sea. It is not often that myths arise in our own times. When they do arise they may take generations to marinate, to become part of the baggage of belief we lug around with us. The mystery concerning the Great Wall of Faial in the Azores is an exception. It is a modern saga that generates an immediate effect on sailors visiting that port. The compulsion to respond is inescapable.

Faial is a small harbour on the island of Horta. It is well out of the commercial, industrial and touristical influences which have destroyed the symmetry of so many similar ports and islands. It is essentially as it was a hundred years ago, with one exception...The Great Wall.

Until recently Faial was known for three things. Whaling, which is still permitted using hand thrown harpoons from open whaling dories, a hard way to make a living. Hydrangeas, the lush banks of which stretch for miles in unbelievable profusion along the narrow roads of the island. And a recently born volcano, a black scar of cinders, mysterious and brooding, making mythic thoughts come easily.

Until now the whales, the hydrangeas and the volcano were the glories of Faial. But during the long reign of the Spanish dictator Salazar, a mole was built (mohle in Portuguese). It takes its formal name from its builder and is known as the Mohle Salazar, but to sailors it is, and will remain, The Great Wall. It is fifteen feet high and extends almost the whole length of the open half-moon harbour, creating a sheltered, year round anchorage so attractive to sailing yachts.

It is a working mole with a wide mooring and docking quay which carries a roadway and a railroad crane along its entire length. On any bright summer day there will be fifteen or twenty sailboats, from all over the globe, docked and rafted along the quayside. But it is the Wall itself, not the quay, which holds a sailor's attention and excites his imagination.

Some years after it was built, a passing skipper felt compelled to paint his boat's name on the Wall. This first entry, now lost in the jumble of a thousand others, quickly set the pattern for skippers who followed.

Leaving records of presence is an ancient and universal compulsion. Our ancestors painted deer on the wall of the cave to seek supernatural assistance in the hunt. At the other great wall, the Wailing Wall in Jerusalem, Jews still press paper appeals for protection into its cracks. The physical record has always been an appeal to the Gods.

This same appeal to providential intervention was at work in Faial. Over the years it became strong habit for passing sailors to emulate the first recorder and leave their own marks, their records of presence, on the Great Wall. Sailors turned artists became ever more ambitious. Crew names appeared, details of passages and times run, and, finally, one more talented than the others, added a sketch of his boat. From that sketch, as from the freshening wind of a new idea, the Wall blossomed with colors and images blending into unity, a collective work of art.

Yacht after yacht, coming into Faial, found it necessary to acknowledge the Wall from which the harbour derived its protection. Exquisite (and sometimes not so exquisite) portraits, motifs, messages, pictures and designs, spread over the wall, just as the enormous and colorful hydrangeas spread over the island itself. Someone (some thousands) was building a cathedral.

Skippers who had left records, confessed a disinclination to ignore a curious warning concerning the Wall which was passed from boat to boat. It seems that, just as the scratchers on ancient caves were seeking benediction, so the sailors passing through Faial were seeking good auspices. Millenia have not changed us much.

The myth has it that those boats which passed through Faial without leaving a record on the Wall, had sailed away into distress and disaster of one sort or another. Never start a passage on Friday, always drop a flower into the water on departure to ensure safe return, never say you are going 'to' a port always say 'towards', and always, when you pass through Faial, leave a visual plea for benediction.

The Wall is the steepled hands of a thousand sailors, very much aware that at sea they deal with forces beyond their understanding and ability to cope. Some of us are not convinced that God reads the Wall, but most have concluded that 'it couldn't hurt'. And although no one has chapter and verse of those boats which had sailed off and inherited the wind, the lack of evidence has not weakened the nescient compulsion to conform. We are all witch doctors shaking rattles at lowering clouds.

Whether or not the myth has substance, (a curious requirement for a myth) it remains the effective excuse for the glorious Wall. The Wall satisfies our deep, and these days mostly denied, belief in archtypical goblins and allows us to cross ourselves against their powers. It also encourages a hard to ignore itch to let the world know that we were there.

There are images from all over the world. Hawaii, Poland, Germany, Italy, Scandinavia, France, England and boats from my own country. Francis Chichester left a record and a painting, Walkabout, those lovely people from South Africa, left their mark. To complete a cycle of youth and age, there is a sketch of Bris, skippered by the baby circumnavigator, and a portrait in bold red and white by Sir Humphry Barton, the granddaddy of us all, of his lovely Vertue, Rose Rambler.

I pride myself in being rational and unsuperstitious (hah) but I was not going to take any unnecessary chances. Thus I found myself arranging for an extra day in Faial to make my offering. I climbed the hill to Teofala's hardware store, where everything a cruising sailor could ever wish for is stocked. With some difficulty, Portuguese being what it is, I acquired three small pots of paint, red, white and black, and approached the Wall. I found a small blank rectangle high up, built a scaffolding and, a latter day Leonardo with paint dripping up my sleeves, I produced an amateurish (amata means love) plan of my Westsail. As I stepped back I was astonished to see that this crudest of efforts had been transmuted by the magic of the Wall into a strong and recognizable portrait of my beloved boat. The lines are shaky and the paint dripped a bit, but superstition says nothing about excellence.

I had made my mark. Years and tens of thousands of sea. miles later, I am reluctant to deny that at least some of my good fortune was due to that hot afternoon at the Great Wall of Faial. 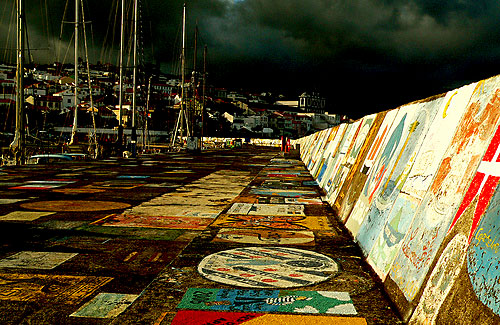 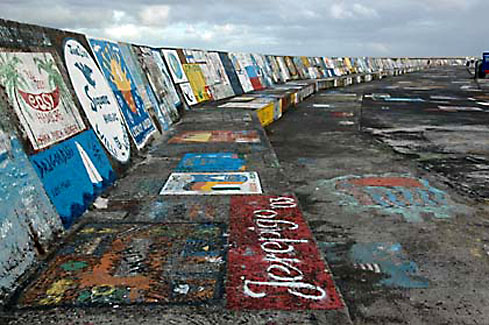 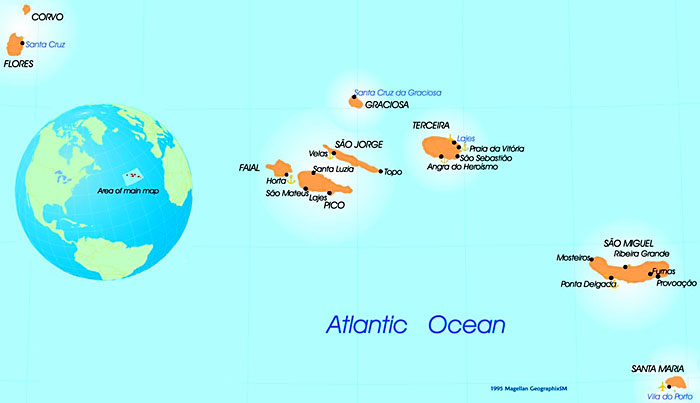