How To Get Into Russia 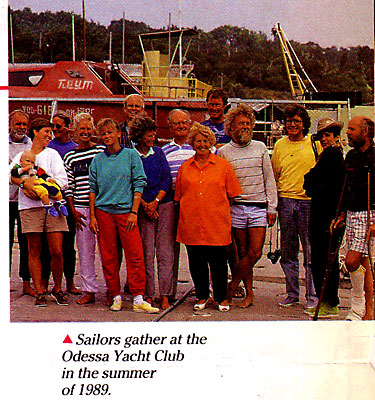 My 46-foot sailboat Unlikely was the first Western yacht to arrive in the Soviet Black Sea port of Odessa. We had arrived in Odessa from Istanbul in June of 1988, without invitation or visas.

We fell passionately in love not only with the elegant Odessaites, but with the prospect of becoming part of the growth of yachting and cruising in the Black Sea. So, in the spring of 1989, we took off again from Kusadasi in Turkey for a summer-long stay at the 100-year old Odessa Yacht Club.

The Odessa Yacht Club was willing to receive foreign yachts but they had no way at all to get the message out that yachts would be welcomed. It was already June, the season was relatively short, visas would be needed and, most importantly, official invitations had to be dispatched from Odessa to boats that wanted to come. To further complicate matters, no one knew which boats wanted to come or where in the broad Mediterranean these boats might be.

I turned to the Soviet Amateur Radio club for advice concerning the use of ham bands in the U.S.S.R., because it had become clear that the only possible way of getting information out to prospective yachts was by ham radio. Telephone calls took four days to arrange, telex was almost as bad, and forget about fax. If boats were to get through the complicated process of location, receiving invitations and getting visas, only ham radio could accomplish it.

The Soviet hams informed me with that Slavic shrug and wink that, of course, a boat tied up to a Soviet port (or any port, for that matter) was not supposed to use a Maritime Marine call but "don't worry, go ahead." I worried but, on their advice, sent out the word that the Black Sea was open.

My station aboard Unlikely was state of the art. My Russian ham friends cooed over the ICOM 720, the matching ICOM auto tuner and the integrated ICOM linear like a young daddy over a first born son. All was in readiness except that there was the enormous hill behind the club in the exact direction toward which I had to transmit. No problem. The Russians rigged a dipole ashore that missed the hill and we were ready to go.

I went out on two nets. The Cyprus net that monitors almost all of the sailing boats from the Indian Ocean to Gibraltar, and the German maritime net at 14,313 (now 314). The response was instantaneous, and in the course of the next two months we were able to contact, instruct and get official invitations for over 50 vessels, of which 20 actually made it to the U.S.S.R. Ham radio had cut the Gordion Knot.

If you want to go to Russia, you may send your request to me at The Odessa Yacht Club, Odessa, U.S.S.R. You will get an invitation with which you can apply to any Soviet consulate for a visa. If you prefer, a letter sent directly to Comrade Prochorovitch at the yacht club will accomplish the same thing. You need send only name, age, and passport numbers and the name of the yacht.

There is no more exciting place to be right now than in the Soviet Union. They love Americans and they are passionate sailors.